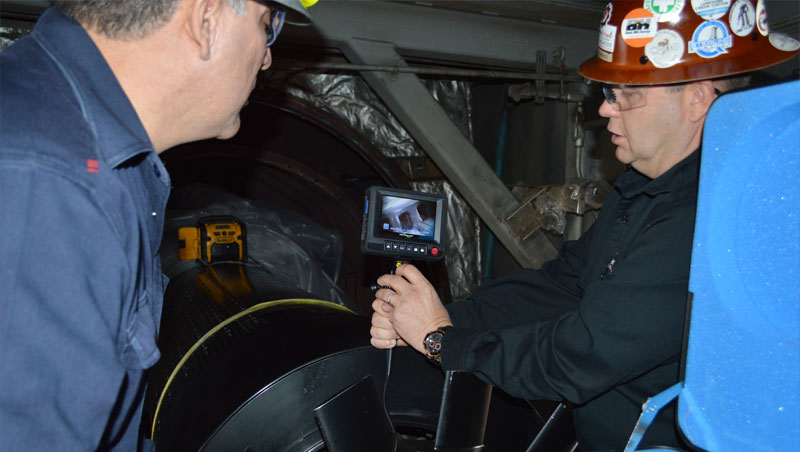 Inspecting the internal condition of a turbine generator is an important maintenance activity, but tearing a unit apart is a long and expensive process. Borescope inspections offer one way to minimize work while still getting the information needed to evaluate operability.

Major gas turbine and generator inspections can be very time consuming and costly. Equipment can be out of service for weeks and often inspections reveal that the machine is in fine working condition. If even a handful of steps can be completed just as effectively but in a shorter period of time using new tools, it can shave days off an outage and save owners many thousands of dollars.

Baseload brought in a crew of nine workers to conduct a major inspection overhaul of the Calpeak generator. The facility supplies power to the San Diego area, especially during hours of peak usage. The plant operates an FT8 Pratt & Whitney Twinpac package with two Pratt & Whitney gas turbine engines and a Brush BDAX 7-290 ER turbine generator.

The rotor weighs about 16 tons and rotates at 3600 rpm. As part of the inspection, it must be extracted from the stator in which it “rides.” Once removed, the stator can be inspected and cleaned, and electrical testing can be conducted. Workers also clean the rotor and conduct electrical testing on it.

For the Calpeak job, the team extracted the rotor from the generator and conducted a series of borescopic visual inspections inside the rotor. Borescopes offer one timesaving measure because visual inspections can be completed less intrusively. The slots can be viewed to see if any passages are blocked, identify insulation deficiencies, locate dirt buildup, and determine the overall condition of cooling vents.
“We’re looking to see if there are any abnormalities,” Lowrance said. “We want to be able to definitively point those things out to our client.”

The goal is to determine if any extreme deficiencies warrant taking the rotor to a shop to make internal repairs. If the inspection identifies only minor concerns, the conditions may simply require monitoring for further deterioration.

The documentation capability of borescopes comes in quite handy in the monitoring process, which can take place over a long period of time. Once the generator has operated for a predetermined number of hours, possibly in the hundreds or thousands depending on the finding, the team would go back in and look at the areas of concern to see if problems have migrated or worsened.

“Using flexible, articulating video borescopes to conduct the required inspections eliminates literally days of labor that it would otherwise take to tear down a system like this,” Lowrance said.

In years past, flexible fiberoptic scopes were the industry standard. However, because of the nature of fiberoptics, image quality was not nearly as good as today’s video borescopes. After testing and leasing a number of borescope options, the Baseload Power group now uses Hawkeye V2 video borescopes. Lowrance said the Hawkeye scopes are very cost-effective, especially in light of the savings in labor.

“Borescopic inspection allows us to quickly inspect—deep inside the rotor—and capture photos and video, which become part of our full report to our client. Every time we go through a borescope process, we keep those still pictures and they are added to the report,” he said.

While the most revealing images are placed in the report (Figure 1), the remaining pictures can be given to the customer on a USB drive so that they have all the photos without overburdening the report with hundreds of pictures.

“There are very sophisticated video borescopes on the market that sell for $40,000, $50,000, and even $60,000,” Lowrance said. “Over the last 20 years I have used many of them, but the bottom line to me is that—for our needs—there is no greater value to using those than the scopes we use, which sell for a fraction of the price. The Hawkeye V2 is truly a more user-friendly device for everyday maintenance guys to use.”

The difference between the higher-end borescopes and the Hawkeye is really just measuring capability, according to Lowrance.

“At the end of the day, if you find a nick on a blade, you can slide a piece of safety wire inside and get it into the picture. That’s one way you can make your call,” said Lowrance. “I know that seems primitive in today’s digital age, but in many normal maintenance instances, precise, expensive metrology is just not needed.”

Of course, the inspection results dictate what follow-on maintenance must take place. There are established tolerances for nicks in blades, and those tolerances determine whether or not you have to top case the jet and blend the blades or if they can remain in service as is. Having some form of measuring capability may be necessary.

“In those instances where measurement is needed, we can always rent a metrology capable borescope for about $150 per day, and not have to charge the client for an instrument like that to be on the job site at all times,” Lowrance said.

When asked if the use of borescopic inspection offered a particular advantage during a major overhaul like the Calpeak assignment (Figure 2), Lowrance responded, “It is most valuable on these types of major overhauls, because you have the rotor out and you’re able to look under the caps on the rotor, look at the insulation, the pegs, the blocking, the windings, and visually inspect the crossover. You’re able to see everything internally that you simply can’t see externally.”

A Photographic and Video Record

Lowrance noted that because the rotor is a 16-ton piece of equipment rotating at 3600 rpm, there is a lot of centrifugal force and a lot of different inertias going on inside the rotor. The borescope examination gives inspectors the opportunity to look at every possible issue and record conditions via photos and video. With the findings documented and placed in a report, or saved in a database for review during the next inspection, owners have evidence to base decisions on.

That is especially important for major inspections because they only happen about once every 10 years. With the historic documentation, owners can assess the equipment’s current condition and track comparatively if blockage is shifting, insulation is moving, or deterioration is worsening.

Additionally, images can sometimes be used to theorize about other indications. For example, if vibration levels increase, a savvy technician may be able to review photos and conclude that a previously observed blockage is migrating. If a system has been in operation for 20 years or more, this type of approach offers the ability to really trend the machine’s operation.

In minor inspections, borescopic videos can be nearly as important. For example, if an oil line burst on the outside of a machine and the generator sucks it into the intake, it may not immediately affect the way that the generator operates. However, in time, the greasy film collects dust and grime. The buildup can diminish airflow, which can then create tracking or overheating. Those conditions can become a very big problem.

Borescopes save the extraordinary man-hours required to dissemble panels to get a look inside. A borescope allows you to immediately see what’s going on and acquire some real-time photographs.

As an example, Lowrance recalled a New York plant overhaul he was involved in. There had been some oil and foreign material sucked into the generator intake. Using the borescope, Lowrance was able to see what appeared to be various metallic and semi-metallic particles inside the generator, which, of course, is not good.

“For the initial inspection, I went in with the borescope, saw what was going on, took some photographs, and was able to put all of that into a report to give to the customer and say, ‘Here is what is inside your generator,’ ” Lowrance said. “So the customer was able to see the issues first-hand, and that, of course, helped them to make the decision to spend the money to pull the rotor before the situation became a much bigger problem.”

Useful on All Models

“At the end of the day a generator is a generator,” Lowrance said. “Each manufacturer tries to maintain the highest industry standards. However, we primarily service the Brush community because they are the most prolific generator used in the type of power generation that we specialize in.”

Many of the Brush generators are packaged with Pratt & Whitney turbines. The units have been installed in locations throughout the world.

“In the case of our work, we can see inside the rotor to inspect the cooling passage, the lamination to the slots, and the coil locating dowel [Figure 3], using the borescope,” Lowrance said.

Baseload Power inspects the windings or turns and coils, and the blocking and air vent gaps. It can also inspect the insulation and assess the overall condition of the rotor. Having the ability to look at different aspects of the windings inside the rotor is essential to achieving an understanding of what is really inside the generator’s big black body.

Ten years from now, when it is time to conduct another major inspection, the team performing the work will be able to look back at Baseload Power’s documentation with confidence. Either they will find that the system aged well or that conditions deteriorated over time. Whichever the case, the borescopic inspection will have served a vital role in the assessment.