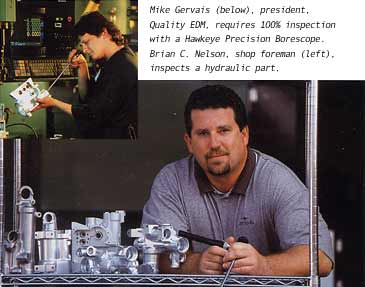 Nobody in the EDM business likes having a customer reject parts because of hidden flaws.  But Mike Gervais, president of Quality EDM in Anaheim Hills, CA, hated it so much that he bought the quality control equipment that his customers used – namely, borescopes.  Today, Gervais has a policy of 100% inspection, using a Hawkeye®  Precision Borescope from Gradient Lens.  He has not only improved the quality of parts delivered to customers, he says, but has also reduced scrapped parts – for an annual cost savings that can run to thousands of dollars.

A visitor who walks through the Quality EDM plant can’t miss the aura of pride and cleanliness that seems to reach into every corner of this shop.  The building’s white exterior is crisp and fresh against the blue sky.  A freshly paved parking lot is filled with late-model cars.  Inside the plant, there’s plenty of fresh air and light.  Quality EDM takes advantage of its location in the warm-weather climate of Southern California, opening up the spacious drive-through loading bays during the day to admit plenty of fresh air and sunshine.

The company has been growing rapidly during the seven years it has been in business.  Founder and president Mike Gervais had been an EDM operator himself, and believed EDM had a strong future.  But he wanted to he his own boss and needed to work in an environment with a strong commitment to product quality.  When he opened Quality EDM’s doors in 1993, he started out with two EDM machines and three machinists.  Today, the company has 20 EDMs (wire, sinker and fast-hole types), 10 employees, and has recently purchased its own 9,000-square-foor building.  Annual sales are approaching $5 million.

Quality EDM handles a huge variety of jobs, according the Gervais.  “We make tooling for oil drilling, stents for angioplasties, hypodermic needles, fuel injectors for space shuttles, and molds for plastic injection molding.  The molds we’ve made have been used for all kinds of things – from medical supplies like IV tubing, to fun stuff, like the molds for Kool Aid drinks.”  The company’s customers also run the gamut, from players like Boeing, Textron, and Parker Hannifin in the aviation sector to Johnson & Johnson in the medical sector.

The company handles some exacting work.  “We make some very small holes to .006 with tolerances of .001 inches in diameter,” Gervais says.  A substantial quantity of the work Quality EDM foes involves finishing parts that will be used in aviation, primarily on the hydraulic systems within the aircraft that control moving the parts, such as raising or lowering wing flaps, or extending or retracting landing gear.  “We do a lot of manifolds and a lot of hydraulic sleeve and slide assemblies.  On parts like these, you have ports that have to connect in order for the part to function properly.  If they don’t meet, the flow of hydraulic fluid through the part is restricted and the part won’t do its work.”

Just one manifold may have as many as 10 or 20 intersecting ports, each at a different location and angle, each requiring a different setup.  With so many different steps required to finish such a labor-intensive part, there’s abundant opportunity for something to go wrong at one step or another.  “Suppose I’m burning a hole in sideways, maybe five inches down inside the bore.  This is a perfect example of where EDM is required, because it would be impossible for a machinist to drill inside the bore.  But let’s say that there’s some wear on the bottom of the electrode, and the hole you’re making doesn’t go all the way through to the connecting port.  In a case like that, you won’t be able to detect the problem with the naked eye, because the ports are recessed deep within the manifold.  The problem may go unnoticed until the customer receives the part, tests it, and finds that it doesn’t have the correct pressure readings.”

A problem like this is not just embarrassing, but costly, Gervais points out.  “It’s a little late when they call you down after you’ve done the job.  You can produce a whole batch of parts, and ship them to a customer, before finding out about the problem – and instead of having one bad part, you might have 100!  That’s major!”  For many EDM shops, a spoiled batch is extremely costly because each part can be worth hundreds of dollars in time, labor and materials.  The EDM shop is expected to absorb the entire cost of the rejected part, including all the labor that went into the piece before it arrived for finishing at the EDM facility.

It didn’t take many experiences like this to persuade Gervais that a borescope was a good investment.

After discussing his needs with a supplier, Gervais selected the Hawkeye®  Precision Borescope made by Gradient Lens Corp.  The borescope gives clear, sharp images for a modest price, because they are made with a new technology.  The lenses are made with rods of chemically treated glass called gradient-index or GRIN.  Most glass lenses bend light only at their surfaces.  Because a GRIN rod bends light continuously along its entire length, engineers can simplify the design of optical systems.  Fewer lenses do the work of many, reducing costs.

Since Gervais bought the borescope and implemented a 100% inspection policy in his plant, they have had no more rejected parts.  The policy has paid many dividends in customer satisfaction, and in winning new bids.  “If your customers know you have the same ability to inspect your work as they have, it gives them much more confidence in your ability to do the job.”

Machinists at Quality EDM use the borescope in several ways.  Most of the time, they connect it to a video system so they can see an enlarged view of the part’s ID.  With the probe reaching deep into the interior of the part, they can check for connecting ports or examine metering edges inside hydraulic sleeves to verify that they’re perfect, sharp, and free of burrs.  At other times, the machinists use the scope by eye, right our on the floor.

“You can also use it with a lathe with a digital readout to check locations and metering edges of hydraulic sleeves,” Gervais says.  “You put the part into a lathe, then you stick the borescope in there, you set the zero on your digital, and then you move it in and it will show you exactly where those spots are.  That’s how all the big companies have it set up.  They’ll set the digital at zero and start coming in with the probe to check all the linear dimensions.  The digital readout tells them exactly where the part is placed.”

“On the metering slots on hydraulic sleeves, we use the borescope to detect damage on the inside of the bores and the metering edges, like a chip.  These parts are sometimes nitrited, which produces a brittle coating.  After the EDM process, chips may occur, which will force us to scrap the part.  The borescope will also allow us to see if a starter hole isn’t cleaning up.  Of if there are any chips around the edges, or any inconsistencies.”

Gervais has found his Hawkeye borescope useful not only to check the finished piece of work, but to check setup too.  If a mistake is going to happen, it will most likely occur during setup.  “Lots of things can happen.  The EDM electrode can cut into a part of a rim it was not supposed to touch, or the holder touches and damages an internal surface and you can’t visually see it with the eye.”  So at each setup, the operator puts a piece in the machine to run the operation, and then inspects it carefully with the borescope afterward.  Once he has made any adjustments to the setup that are necessary, he runs the operation on the rest of the batch, with more confidence that errors won’t occur.

“Inspecting carefully during setup minimizes scrap later.  This is an important part of cost control for us, since we’re working with very expensive parts,” Gervais explains.  Visitors to Quality EDM are likely to run into the company’s motto, framed and hanging prominently on the wall.  It says, “Quality is never an accident.  It is always the result of high intention, sincere effort, intelligent direction and skillful execution; it represents the wise choice of many alternatives.”  For Gervais, having the Hawkeye®  has made financial sense, while giving the company a better way of living up to its quality commitment.