With a Hawkeye® Borescope you can inspect chambers, leades, lands and grooves, gas ports, and crowns from muzzle to breech in rifles and pistols. Images captured on video can be stored and transmitted to other computers or on the Internet. 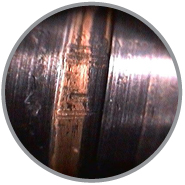 Erosion of the leade. 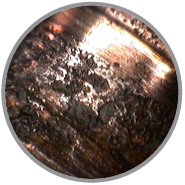 Deep pitting on lands and grooves.

Shooters, gunsmiths, and firearm manufacturers around the world depend upon Hawkeye Borescopes to inspect their barrels.

Shooters improve their accuracy by inspecting bores of new rifles before firing, to locate copper, carbon, and lead fouling after firing, and to discover defects in used firearms before they are purchased.  When a favorite rifle quits shooting, the Hawkeye is used to search for the cause.  Often, fouling is the problem.

Gunsmiths use the Hawkeye to diagnose malfunctions, to prove to their customers that the repair is needed, and to prove that the repair was done. Customers are amazed by images of copper and carbon fouling, the erosion caused by “hot loads,” and cleaning procedures that don’t work.

Manufacturers use the Hawkeye to check the quality of incoming barrels, to monitor machining of chambers and rifling, and for final quality inspection on the shop floor. Images captured on video can be viewed by engineering, quality control and outside vendors simultaneously. 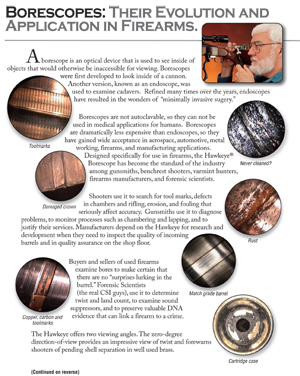